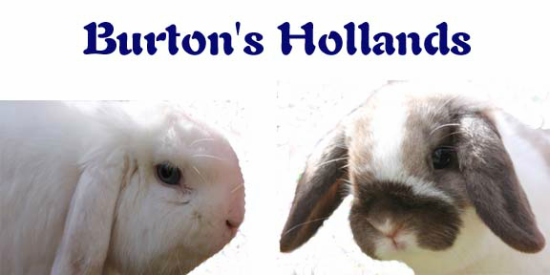 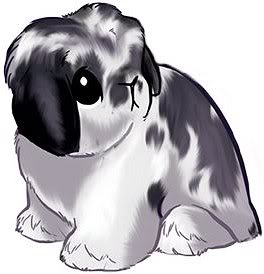 The Holland Lop is a small rabbit that is both charming and loving. Breeders and owners both enjoy Holland Lops a lot.

Although Holland Lops are small, they are active and quite playful, so they should be housed in a cage that will give them plenty of room. Three quarters of a square foot per pound of adult weight of floor space in a cage is pretty much the rule of thumb for rabbit cages of any breed. Holland Lops are a good choice for a new rabbit owner. Some does (females) tend to be skittish and/or hyper and should be handled carefully. Holland Lops are generally very easy to care for and are a popular breed for pets due to their size and fun-loving nature.

Holland Lops weigh between three and four pounds, though three pounds is the ideal in the show ring. Holland Lops are known for their short, cobby bodies, round heads, and massive appearance in a small rabbit. Holland Lops have short, dense fur that comes in a variety of colors. Holland Lops are shown in two basic color classifications; Solid (not spotted) and Broken (spotted). Within these classifications there are several groups and colors. These groups are classified as follows.

The Agouti Group comes from the name "agouti" which is a term that means the hair shafts have three or more colors on them. Agouti types include Chestnut Agouti, Chocolate Agouti, Chinchilla, Chocolate Chinchilla, Lynx, Opal, and Squirrel which may also be known as Blue Chinchilla.

The Broken Group. As well as being a show classification, the Broken group also encompasses Tricolor and Regular Broken. To be considered Broken (White in conjunction with any recognized color, there must be color on the nose area, on both ears, around both eyes, and on the body. The color should cover no less than 10% of the rabbit and no more than 70%), Tricolor (black and orange with white, blue and fawn with white, chocolate and orange with white, or lilac and fawn with white; like a calico cat).

The Pointed White Group. This group consists of those that are White with "points" of color on the nose, both ears, all four feet and legs, and the tail. Colors that are accepted are white that has black, blue, chocolate, or lilac points. Solid colored rabbits are classified in the Self Group.

The Self Group may be Black, Blue, Chocolate, Lilac, Blue Eyed White, or Ruby Eyed White also known as Albino.

The Shaded Group are those rabbits that have a body color and either a darker shade of the same color or a different color on the head, ears, feet, legs, tail, and haunches. Rabbits falling into this group include, Sable Point, Siamese Sable, Seal, Smoke Pearl, Tortoise (black, blue, chocolate, or lilac shading).

The Wide Band Group. Wide Band rabbits, except the Frosty (which is white, sometimes with a slight tinge of color) are either a golden or reddish-orange with white or cream on the belly, around each eye, inside each ear, on the underside of the tail, and on the underside of the jowls. Some color variations of the Wide Band group include, Cream, Fawn, Frosty, Orange, Red. It should be noted that rabbits with ears that are carried above horizontal are disqualified in the show ring.

They have ears that hang down about an inch below their jawbone and sit next to their cheeks. The head on a Holland Lop should be high on its shoulders. Holland Lops go through a period of puberty where they can look a little unattractive, but they generally grow out of it at about four months. The timing of this stage can vary depending on the bloodline. Most go through the "uglies" at between two and four months of age. They typically do not finish "blooming" into their full show potential until they are between 12 and 18 months.

Adrian De Cock, a man from the Netherlands, developed the Holland Lop. They are a cross of a Netherland Dwarf, French Lop and English Lop. The breed was perfected by 1955 and was first seen in the United States in 1976. The American Rabbit Breeder's Association recognized the Holland Lop in 1980.

Cage size should be a minimum of 24 inches by 24 inches. Proper shelter with heating as well as cooling should be a factor also. Holland Lops are reported to do well on a diet of pellets combined with Timothy hay, some people also choose to add greens to the diet, though greens have been reported to cause diarrhea. Overfeeding of alfalfa can lead to health problems, and if they are fed solely on alfalfa the results can be fatal. Other choices can include dark green vegetables, carrots, dandelions, clover, and dried papaya. Lettuce and cabbage should be avoided, as they do not have much nutritional value for rabbits. These are affectionate rabbits that enjoy being pet often, though some report they do not like to be touched on the chin.

Holland Lops can prove to be challenging to breed. Finding the right Doe for breeding is the key to success. After mating the female will undergo a gestation period of approximately 31 days, with litters averaging four kits. Like other dwarf breeds, they do have occasional "peanut" babies, which is when the baby inherits two dwarfing genes - this is a lethal gene combination.

It has been reported that it is not uncommon for Holland does to lose their first and maybe even their second litter of kits so don't get discouraged. It usually takes two to three tries to get a healthy litter. Also, when you are not breeding, bucks and does should not be caged right next to each other if their cages are made of wire because they have been known to mate through the wire.